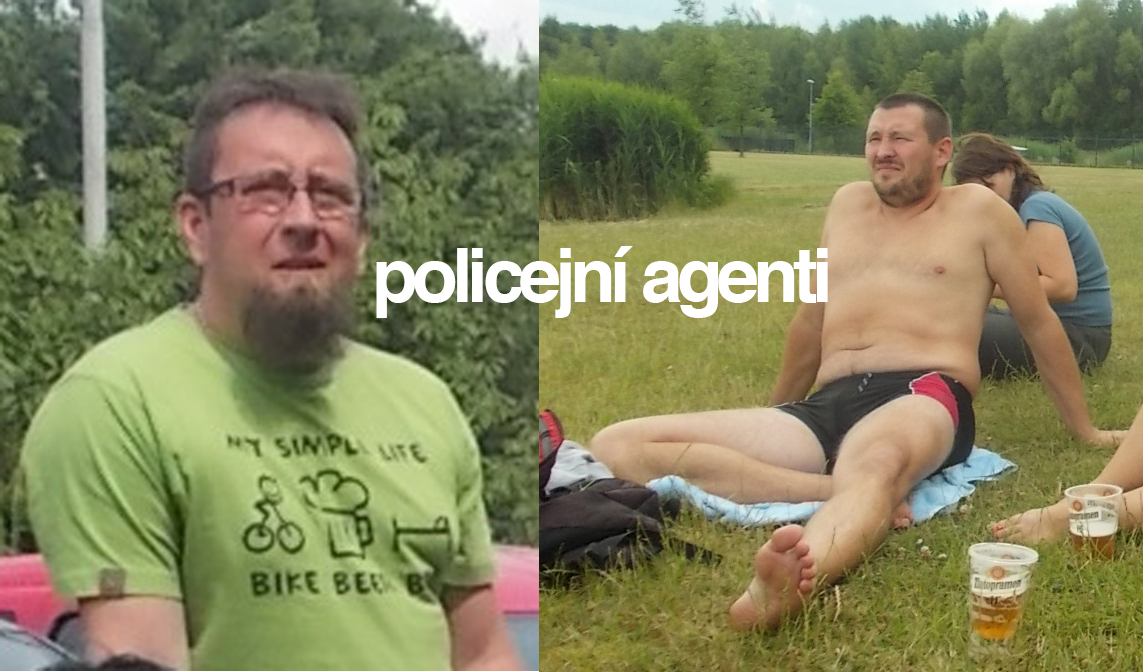 The Czech undercover police agents: Revealed
Three of the anarchists who are currently being held in custody, where they wait for a court decision on whether they will be granted bail or remain on remand, were together with other individuals to attend meetings in the “conspiracy” flat according to the police version. Police claimed they should have been planning an attack on a train carrying military material or Hyundai cars and the alleged attack was to be carried out under the auspices of the Network of Revolutionary Cells. Prosecuted individuals are being accused by investigators of active participation on preparation and testing of incendiary devices (Molotov cocktails) intended for that purpose. The are also accused of participation in the logistics of the attack itself. The accused comrades however, rejected the police version and pointed out the ridiculousness of the claim itself, that someone would try to ignite a train made of steel using Molotov cocktails.
Let’s now focus on the important facts. The flat where the alleged terrorist group meetings should have taken place is no “conspiracy” safe house but merely a regular apartment where several people (some of them connected to the anarchist movement) lived. The decision to live together came from necessity of sharing to reduce living costs not from intentions to conspire. Shared housing is a perfectly normal thing, today and definitely not just among anarchists.
The flat occupancy was not the subject of secrets and that is most likely why it was so easy for undercover police to “infiltrate” the group. Activist meetings organised at the apartment (preparation of activities such as fundraisers, public meetings, cooking for homeless people) were also not a subject of any excessive safety measures and such activities can hardly be categorized as terrorism. It was the undercover police agents who were always trying to radicalise the issues and talked about the necessity to do “something more” than just peacefully protest.
The agents were constantly trying to persuade others that sticking up posters is irrelevant and that action should radicalise. These challenges were usually accompanied by swagger about their previous activities. Imprisoned comrades who were in touch with the undercover operatives also indicated that the idea to attack the train came from agents themselves, without anyone else being actively involved in the development of the plan.
One of the detainees Martin I. wrote:
“Operation Phoenix” is a provocation initiated by undercover police agents with the purpose of drag people into it and then put the blame on the for organising the whole thing. I suspect that the police and investigators are manipulating with the evidence. They think we will plead guilty but our confession would represent just mere lie and we can not allow this to happen! It is interesting how one can become a victim of repressions through arranged undercover operations. The police orchestrated everything to blame us with a very clear intentions to involve many people. They wanted to have terrorism case so they created it.

Who are they and where did they come from?
The question arises, who are these agents are and how did they managed to infiltrate anarchist circles. The agents acted under pseudonyms Petr and Robert. In the first phase of their undercover work they stuck to group of individuals from the Voice of Anarcho pacifism (VAP). This informal association of anarchist groups are well known for their high degree of openness. VAP profile themselves more as a free community or local group rather than a federation or association and due to its relatively open and informal “structure” VAP is of course a very easy target for infiltration.
The agents then gradually increased their appearance and participation at various public and private events to evoke the feeling of being a part of the movement and to gain confidence from others, however their efforts were not very effective or successful, and although lacking evidence, some people considered them suspicious and tried rather to avoid them. As long as it was just allegations and speculation, no one  objected to their further participation. They have been spotted at community celebrations ‘Sousedske slavnosti’ in the city of Most (28. 6. 2014) and at antifascist blockade ‘Bratislava Blokuje’ (14. 3. 2015.)

To print, arrange or carry
The reasons why agents managed to make some people cooperate, may vary but all individuals with whom they were in contact agree on one thing. The agents very actively and willingly provided different types of support when and where needed. When posters were needed, they offered to make more copies. When access to the internet or telephone was needed, the agents made sure it was available. If transportation was a needed, the agents provided two vans and paid for fuel expenses. The license plates of one the vans is OCM-63-80.

They will not silence us they will not stop us
What conclusions can be drawn from the information available? In the first place, it turned out that the anarchist movement is most likely a thorn in the eye to ruling class, and that we see as a positive fact. The anarchist movement has always been openly opposing all the systems of exploitation and domination of man over man. It is therefore not surprising that the state and it’s forces (police) are attempting to suppress and discredit such a movement. It is the state institution whose historical role is to maintain social hierarchy and domination of the ruling classes. Operation Fenix and the deployment of police agents reminds us of well known facts. The state does not hesitate to use the most villainy methods to discredit, fragment and repress the anarchist or any libertarian movement with the intention of challenging status quo. Historical experiences also show that basic principles of anarchism can never be fully suppressed, and there will always be plenty of followers who will apply them into practice. Police raids, robberies, intimidation, extortion and imprisoning our comrades. The fact remains that the anarchist resistance is still part of everyday reality. We intend to continue with intentions of active influence through words and through positive direct actions.