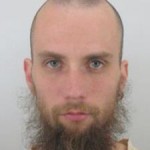 On 24th October 2015 was my article published on the Association of Alerta’s website. Where I‘ve expressed the suspicion that the police want to arrest me and imprison me. This suspicion has become the reason of my disappearance from the perspective of the state power. In less than a month after the publication, my suspicions were confirmed. On 12th November 2015, according to the police website, it’s been confirmed that they’re searching for me as you can see here:

From the realm of conjecture, therefore, we move into the realm of facts. It’s now confirmed that I am under the police investigation. I don’t exactly know what that means for me and what’s gonna happen. I don’t know what I’m accused of. But I’m sure that meanwhile I am enjoying my freedom, the police would rather see me locked in a cage, which exists under the ”code name” prison.

Despite the fact that my enemies think I’m hiding in some hole, I am certainly not. I’m moving freely in various countries and cities. I’m aware of the risks that are associated with it. But I can’t be sure whether everyone else is aware of those risks. So everyone, please, respect the following prompt:

If you’ve seen me. Doesn’t matter who, where and when. Act like you had not seen me and don’t even talk about it. Ever! If you spoke with someone who claims that they saw me, try to convince them to not talk about it. But don’t do this over the phone or the internet.

If you wouldn’t respect this call, it would be very irresponsible of you and it might have some tragic consequences. In worse-case scenario it would be taken as an unacceptable informing.

On the police website there is right next to my picture and columns “dangerous” and ”armed” stated ”YES”. And I need to confirm this again. Yes, I’m dangerous and armed!

I’m dangerous! I present a security risk for the stability of capitalism. A system, that provides extreme wealth for minority, privilege and power, while the majority condemned are destined to poverty and social insecurity. To existence of a conditional willingness to let the bosses to exploit and oppress us by the bureaucratic and political managers of misery. I’m dangerous for capitalism and states, that ensures its continuation. I’m dangerous because I’m united in a common struggle with those who want to put an end to capitalism and state. From the perspective of the police I’m dangerous because I refuse to adapt to the conditions of exploitation and because I encourages others to rage against them. I’m dangerous because instead of living on my knees I prefer upright stance. Beyond the laws, but with pride. With dignity of a creature, that prefers joyful logic of fight and rejects the mentality of compliance.

I’m armed! I’m armed with solidarity, the desire for freedom, courage and other weapons. I don’t hesitate to use those weapons to defend my interests as well as others’, who are just like me underprivileged, people that capitalism holds in misery, exploits, tortures and murders them. The police would rather see me unarmed. In other words: without solidarity, being adaptive, resigned and paralyzed by fear. Too bad for them. The advantage is on my side. I’m armed, therefore, supportive, optimistic and unfettered by fear.

I’m still strong and unbreakable. I draw energy from the solidarity of other anarchists in various parts of the world. With the same enthusiasm and I’m trying to be supportive to them. Providing some resources to them and helping them. Energy, motivation and strength. I’m not alone and they’re not alone. That’s what keeps us alive. That’s what allows us to go forward.